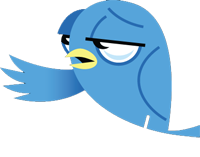 With the amount of tweets that have been posted, it is surprising that most people that create an account abandon it within 2 weeks. Why does this happen?

Likely the most consistent reason is the lack of understanding. The user likely created the account because they have been hearing Twitter this and Twitter that, but they generally don't know why they are there. Both from a personal and business standpoint. People come in with the aspirations of instant gratification. They want to ask a question or post a controversial statement and have someone respond. The fact is, you won't find that instant gratification on Twitter. You must either build credibility in a field that that people are interested in...don't count on this happening very easily, or the more likely situation, you sign up follow users that tweet about what YOU are interested in and start engaging in conversation. That's right engage in conversation.

On the business side people tend to forget about the social aspect of Twitter and want to talk about their product or service and want instant sales. Again, when they don't start seeing the instant gratification they move on to their other tasks and start posting less and less. Finally, another abandoned account. Maybe they come back a month or two later, but still without and understanding of what they are actually doing there, it just doesn't last. We see and hear this all too often from small businesses. To avoid the abandonment factor have a strategy before jumping in. Define your goals and ensure that you have a way to measure your success. Small businesses tend to stick to a marketing strategy a little bit better if they have a strategy to follow and can see what they are getting out of it, even if it is not a direct sales measurement.

You likely have face to face conversations with people about your product and service, which can be a very effective marketing tool as you get to know that person and grow your professional relationship. Carry this over to social media. If as a small business marketing strategy you consider Twitter as a relationship marketing tool and engage in conversation, you will have greater success. Answer peoples questions about your industry and get involved. I can't honestly say that this will be more effective than face to face relationship building, but who has the time or ability to speak to such a large number of prospects face to face.

To sum it up, engage in conversation and build relationships. Sales and referrals will follow, but don't come in with the mentality of 'if I build it they will come'. Try and understand you are there to build relationships, not just talk about yourself. You will be less likely to abandon your account, or social media all together, if you go in with this mentality.