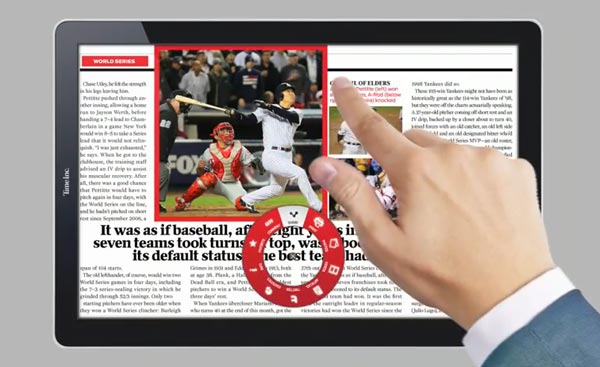 Rupert Murdoch, CEO of News Corp, is planning on partnering with Apple to deliver a tablet-only subscription-based newspaper later this year called "The Daily." Rumor has it that the magazine will cost 99 cents per issue, and will be the first of many publications to embrace Apple's new subscription platform in iOS. With the pains that traditional print publications are currently struggling through there is no doubt that more media outlets will move towards offering digital versions of their paper publications (in some cases they may offer only digital content, as with The Daily), and this means that businesses will have the opportunity to deliver more dynamic and interactive advertisements to their potential customers.

When you think about it, traditional print advertisements are kind of boring. As consumers have moved into an app-heavy world where much of their content consumption takes place on a screen rather than between the pages of a magazine or newspaper, it's becoming apparent that it takes more than static text or an image to get their attention. By focusing more on digital advertising, such as we've seen on Apple's iAd platform, marketers have a huge opportunity to create interactive marketing experiences such as product demonstrations, videos or even embeddable branded applications. Best of all is that these advertisements can be more focused on conversions, for instance redirecting a user to your website to complete a form, or to your Facebook page to gain a like.

Have you considered using a digital marketing avenue to promote your product or service? Are tablet-only magazines and newspapers are the future of journalism, or just a passing trend? Let us know in the comments below!