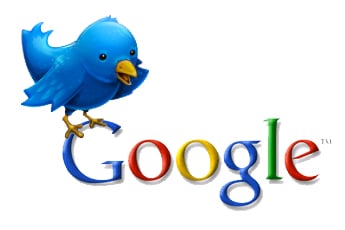 As we have been telling our small business clients for some time, it has been made very clear that social media will soon have an effect on search engine ranks. Well, it looks like the time has already come. In a blog post released today, Danny Sullivan of Search Engine Land revealed some insights into how Google and Bing are currently using social involvement in their algorithms.

Based on the outcome of Mr. Sullivan's communication with both Bing and Google, it's definitely time for small businesses to jump on using Twitter if they aren't already.

In our discussions with many small business owners and executives, we often find that as a company they have adopted Facebook but have held off on adopting Twitter. I think the main reason most small businesses have avoided Twitter is because they have a hard time using it individually.

Interview responses from both Bing and Google revealed that they are indeed using a Twitter data and Facebook data to help rank the NORMAL ORGANIC RESULTS. Both further explained that they used Twitter MORE than Facebook due to the openness of Twitter data. They actually called it a floodgate.

How Much Weight Does It Carry?

Although the impact and complete weight of this "signal", as they refer to it, is unknown, both engine's indicated that they use the popularity of a twitter user that retweets links to help weight the value of certain webpages.

So, for instance, if you are a highly followed Twitter user like Danny Sullivan, the links that you post will carry more value, and impact the organic search ranks of the tweeted link. In order to truly impact organic rank, it seems that you need to become authoritative on Twitter. That involves much more than being highly followed.

If you have a small business and are looking at ways to increase your website's visibility in search engines, get tweeting and join in on the conversation! If you aren't sure where to start and would like some strategy consulting, visit our main site and we can get you started on the right foot!