Is "The Daily" a killer app?

Wednesday was the big unveiling of Rupert Murdoch's iPad-only magazine called "The Daily." We had the live stream of the event rocking in the protocol 80 office and the general consensus was that it's a pretty cool app. Now having had some time to play with the app's various features I think it's a pretty compelling reason to own an iPad (for now, Rupert Murdoch mentioned they were planning versions for other devices), and it's the most interesting take on tablet news I've seen so far.

I think the biggest advantage "The Daily" has over other similar tablet magazines is that the content is constantly being updated and everything is automatically pushed out to the device. In many other magazine applications the user actually has to manually download new content (whether that be a new issue of the magazine or that month's version of the app), but with "The Daily" the first thing that happens when you boot it is a new issue is downloaded for you. 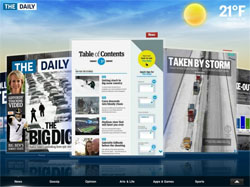 News Corps have also done a pretty great job of arranging content in an appealing and finger-friendly way, and although it's not the most whizz-bang or flashy presentation I've seen in a magazine app (that title still goes to the Project Magazine app in my opinion) it's intuitive and easy to use. One aspect of the magazine that is unique to "The Daily" is the news carousel as a means of browsing stories. Think of it like an automatic table of contents rotisserie, just load the app and click play to see all of the latest news storie's homepage. It's a very visual way to browse the news so photos are built right in, and if a story catches your eye you can tap to read more. 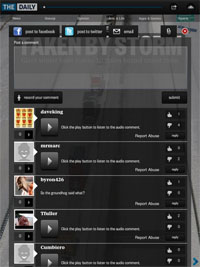 Another cool thing is that "The Daily" has a built-in share window that lets you post a news item to Facebook or Twitter. Unlike other news sites and apps (Wall Street Journal springs to mind) these shareable articles aren't hidden behind a pay wall so your friends will actually be able to read them without having a subscription. That's not really an uncommon feature though, every news app lets you share a story on your social networks or via email.

What is pretty unique is that you can access a story's reader comments from the share menu, and also use your iPad to record audio comments instead of just plain text. Right now I'm reading a story about the big winter storm that has hit the US over the past couple of days, and listening to peoples thoughts from around the country is pretty interesting. It's certainly not an experience I've had with the news before.

Is it a killer app?

So is "The Daily" to the iPad as Visicalc was to the Apple II? I wouldn't necessarily go that far, but I would be pretty shocked if it didn't end up being the de facto news application that everyone who owns an iPad turns to. The content is rich and original, the app experience is top-notch and truly shows the power of the iPad, and the advertising potential is overwhelming. I do think that the subscription model will be a deterrent to people that don't want to pay for anything ever, but I'm looking forward to signing up when the subscription becomes available.

The good news is that Verizon has sponsored the first two weeks of "The Daily" so you can take it for a test drive for free right now! The app store link is below.