I read a pair of contradictory blog posts this weekend, one stating that Twitter needs to break through the 140 character limit for messages in order to grow market share, and another that discussed why the 140 character limit is appropriate and that there are other, more pressing needs for Twitter to address in order to continue gaining in popularity. This topic is one I touched on very briefly during episode 4 of the protocol 80 o'er coffee podcast, but since it has gained attention since then I figured I'd post my thoughts here. Are you ready? Let's do this thing! 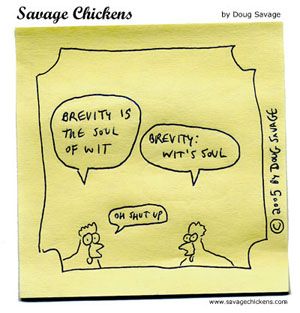 I'll cut to the chase, I like the 140 character limit Twitter has. As stated in the podcast, it promotes brevity. As someone that likes words and who can be a little verbose from time-to-time I've certainly bumped up against the 140 character limit on more than a couple occasions, but to me that's part of the fun of Twitter. Reworking your tweet in order to fit a complete thought into it is like solving a puzzle. Yes, the fact that I enjoy that a bit makes me a total dork - but I can't be the only one!

Aside from that there is a practical reason for tweets to be only 140 characters long. The original idea behind Twitter was to provide a service with which you could update people on what you're doing at any given time, including when you're on the go, which means from your mobile phone. The most obvious way to do this is with everyone's favorite form of communication these days - SMS. The most-common character limit for texting is 160, so Twitter is capped at 140 to allow for a username and colon to be attached to the front of the tweet. That way, when I post something to Twitter, folks can receive it on their phone via a text like so:

Another reason I like the character limit is that it makes Twitter (and tweets in general) unique. If there was no character limit on Twitter, how would it be any different than a person's blog? The way things are now you know that Twitter is a different experience and as a result, you need to approach it differently from a content production point of view. I wrote about this last week, the headline news cycle, in which Twitter becomes more of a promotion tool than a content consumption avenue.

You can still post your blogs on Twitter, it's just that you're linking them instead of having people read it all right there. Twitter's for quick thought style content while a blog is longer form. As someone who creates content it's easy to decide what will be a tweet and what will be a blog post, and it's easy to filter through content you don't want to read. Imagine if you had to scroll through someone's full blog post when you were checking through your list of latest tweets - talk about inconvenient!

The Other Side of the Coin

There is at least one reason for increasing the character limit in my opinion, and that's for retweets and @ replies. Donny mentioned during the podcast that sometimes he wants to retweet something, or respond to it inline, but doing so goes over 140 characters so he doesn't bother. I honestly think this will continue to be a problem to a certain degree for as long as there's a character limit on Twitter (whether it's 140 or 500), but it would be great if there was a smart solution that recognized the RT or @ reply characters and reduced them from the tweet's length.

So what do you think? Is the 140 character limit on Twitter okay? Do you hate it? Let us know in the comments below!