The Social World Comes Together During Natural Disasters

First and foremost I would like to say that our thoughts are with the people of Japan and other areas that have been affected by this morning's earthquake and tsunami.

I like many other Americans can become glued to the television new stations during catastrophes, whether natural or man made. Although the way people that live in the tech world receive their info has changed in the recent years. Instead of getting info only from the TV we now read first hand reports from people that are experiencing the disasters...not just newscasters standing purposely in the middle of a hurricane, but actual people that had no choice but to experience the disaster first hand.

I have been aware of this shift for awhile, but it was once again brought to my attention today as my Twitter feed is consumed with tweets about the earthquake and tsunami which occurred this morning. While my feed is not consumed with people experiencing everything first hand, it is consumed with a variety of influential people spreading the most recent news and resources regarding the situation. In the past several minutes here are a selection of some tweets: 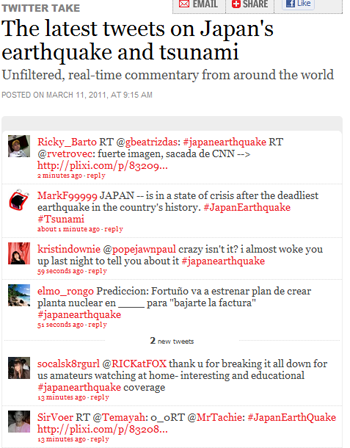 9:23 am: @mashable: Google Responds to the Japan Earthquake With an Online Crisis Center - http://on.mash.to/fmEG0j #tsunami #japan

9:43 am: @dannysullivan incredible photo of tsunami sweeping into japan in @nytimes coverage http://nyti.ms/hwBJJ9

If you want to stay on top of what's happening through twitter, use a hashtag search and start following, follow some of the major news sites and you can also see a real-time update of unfiltered tweets at: http://goo.gl/GsfKu or by going to Google RealTime Search and searching a variety of hashtags: http://goo.gl/6JoHb

It is amazing to me how quickly the online community comes together to share news and even mobilize fundraisers. Yes, news stations mention donations, but I think people think more about actually giving when someone they have a relationship with, whether online or offline, says you should donate. Additionally when there is a personal touch to any news update people tend to take the story more to heart.

When I First Noticed the Movement

When I first began thinking about how social has changed our world in times of a disaster was during the aftermath of the Haiti Earthquake. There were so many first hand tweets of what was occurring and even texts and tweets from people stuck in the rubble. I have had an opinion for a long time that American's get too much of their news from only 1 news source. Whether it is CNN, BBC News, Fox News, etc., they all tend to be swayed in a certain direction 1 way or another. We now have news updates from people all over the world that are experiencing everything first hand. How have you been receiving your news updates? Twitter, Facebook, Blogs, TV, or a mixture of everything?