It's no secret that Twitter has not caught up in rural areas...especially in Pennsylvania. If you have ever been around PA you'll know that much of it is rural, and depending on your interests that is either a pro or a con.

From someone that enjoys Twitter and tries to promote the use of Twitter it is definitely a con. It is hard for people to grasp the value and fun of Twitter when they feel like they are sending Tweets out into space with no one listening. Yes, I can tell them they are probably doing something wrong...like forgetting to be SOCIAL, but it just isn't that easy. First, my thoughts on why we are behind. 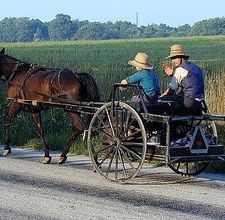 Believe it or not rural PA is way behind in technology. It is not surprising to find areas without high speed internet service. I think we can all agree that you don't get the full effect of web 2.0 when you rely on dial-up internet. Some of these people resort to satellite internet services, but they often prove to be unreliable. Mobile technology goes hand-in-hand with that. We are often in areas with very unstable cell service all together let alone having a reliable 3G or 4G connection. These pitfalls often make it difficult to keep up with social media from a technology standpoint.

Another major reason we are behind is simply due to a lack of population period. These areas have extremely low population and few of them are active on anything besides Facebook. On Twitter we like to talk about local things. Where's the best place to eat, how is traffic this morning, what's the weather like etc. These conversations cannot happen without people.

These are not all of the struggles, but they are the major ones from what I see. What can we do? I don't have control of the technology struggles these areas see, so that is something that will be overcome. What we really need to do is educate. People need to avoid some of what they hear in the media about Twitter and learn the basics. They need to start following brands, people, subjects that they are interested in and start interacting.

Business owners and marketing people have to start embracing social media and interacting with the local public. Not only urging them to leave reviews, offering specials, providing customer service, but also interacting with them on a daily basis...again, building the SOCIAL atmosphere.

There is a lot to share in rural Pennsylvania from hiking, fishing, rock climbing in the PA Wilds to visiting flea markets, farmers markets and historic areas of the state. Saying that there is nothing to share about rural PA that would start a discussion is simply not true. There are many things to talk about that would start discussions, we just have to overcome the obstacles and get people involved. The businesses and people that embrace Twitter and other social avenues now will be ahead of the rest once we get caught up to the times.

Let's get the ball rolling. If you have a twitter account and are from a rural area somewhere in Pennsylvania, or even the U.S., share your username in the comments. Here are a few you can start with.