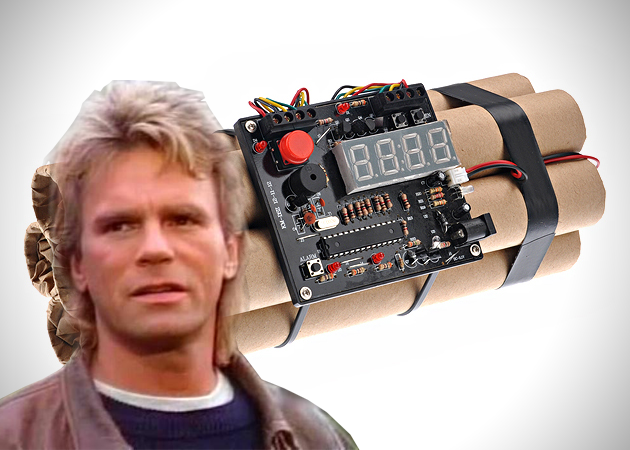 The prospects that show up on your landing pages aren't MacGyver, which means they aren't going to stick around to defuse the content bomb, if you have a terrible headline. For most prospects, you have 3 seconds to grab them, typically with your headline. Here are a few considerations for your landing page headlines.

Like almost anything in life, there's more than one way to skin a cat (no corresponding pic for this, you're welcome.) when it comes to landing page headline copy. The 3 highlighted here are not the be all end all, but they capture the most popular approaches.

You've experienced it, you search for something like, "sell my used cellphone", looking for a great way to off that old brick and you land on a page with a headline such as,

Looking To Sell Your Cellphone?

Want To Find Someone To Buy Your Cellphone?

Want To Cash In Your Used Cellphone?

I'll be the first to admit that those are some crumby headlines, but you get the gist. The headline asks a question. There are times that this can work well. One good example being tying the question in the headline to a CTA that answers the question. For example, when the headline asks, "Want To Cash In Your Used Cellphone?" the CTA button could say something like, "Of Course I Do!!!".

The whole idea behind a loss aversion landing page headline is to make you feel the pain of NOT taking the action the site wants you to. The headline sets out to highlight the prospects fear of not doing what the landing page is pitching. For example, if you search for something like "Air Jordan XI Concord" and click through to a landing page, you may see a headline such as,

Again, these aren't the greatest, but they show what loss aversion headlines are. They use the fear of losing something.

The final approach we're going to look at is a benefit-focused headline. It is indeed as strait forward as it sounds. State a major benefit in the headline. An example or two for buying a used car might be,

Buy A Used Car And Make A Killing On Your Trade

In these examples, you can see that a major benefit of making a killing on your trade or getting a free, 3-year warranty is stated clearly in the headline. These are like the icing on the cake for a prospect.

As with many marketing tactics, each of these approaches shines in a different light. Studies have shown that benefit-focused headlines tend to perform better overall. Question-based headlines are sometimes looked upon negatively by prospects because they clicked through to your landing page looking for answers, not more questions. Loss aversion headlines sometimes annoy prospects that don't scare easily, or scare them into inaction. If a benefit-oriented headline isn't really thought out it can come across as too salesly and break the element of trust. With proper testing and metrics, you can easily get to the bottom of which approach will work best for your specific landing page.