Is Your Small Business Only Using The Media In Social Media? 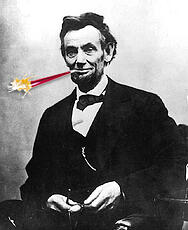 Welcome to our blog's 200th post! I'm very excited to be the 200th post writer (fist pump!), and to have had the opportunity to write so many articles that I hope help your small businesses to be better web marketers!

While traveling today, I had a conversation with Josh (our VP of Marketing) about a blog post he had skimmed earlier in the day about businesses missing the social aspect of social media. That inspired me to ask you the following:

Are You Stuck In Broadcast Mode With Social Media? 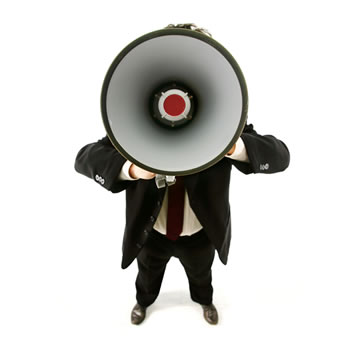 What do I mean by this? Are you a one way social media user? It's OK to answer 'yes'. By one-way, I mean never actually socializing, encouraging socializing, or starting to socialize elsewhere in social media. Rather, you only post updates, or links to your blog posts, etc...

For the record, there are times when our hands (p80, that is) are up when asked this same question. It's something that we are trying to get better at, but struggle with ourselves. For us, it may be because we're busy socializing for our clients, but we really need to practice what we preach.

Broadcast-Only Is For Traditional Media, Not Social Media

While there are certainly times when traditional media content can effectively be shared in social media, it's important to emphasize and encourage the social aspect of sharing content on social media sites like Facebook and Twitter. It's about the conversation when it comes to social media. When you write a newspaper-bound press release, you aren't expecting 100s of letters to the editor in response. You are generally expecting to make the announcement and forget about it. It's a 1 way broadcast.

In social media, you can share the press release, but you need to encourage some interaction and socializing with it. You need to provoke conversation and interaction. If you don't, why bother sharing it through social media?

Good Examples Of Emphasizing The Social In Social Media 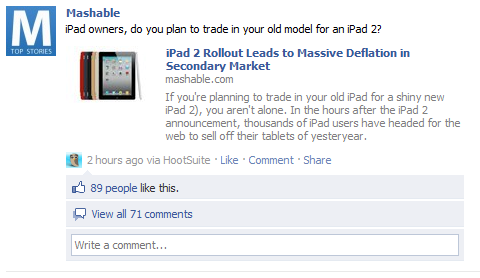 In the Facebook update made by Mashable above, they could have simply posted the link to the article that they wrote about the iPad 2 launch today. Instead, they made the post social by asking their nearly 450,000 Fans if they planned to upgrade. In 2 hours, they received 71 comments and 89 people "liked" the update. Had they not asked if their fans were going to upgrade (clearly a simple question), the comment volume would have been stagnant and the Likes would probably have been minimal.

In the tweet above, @cspenn sparks conversation (rather open invite) by asking for advice. Recommendation requests such as this don't even need to be related to your product or service. You can just put feelers out to see who's listening. When you get responses, you just might have a solid prospect or two. You may find that you have some valuable peers as well.

It's Not Just About You 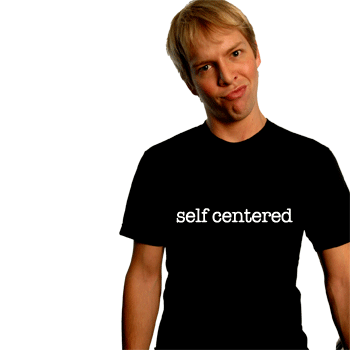 Sure, we all want everyone to see the value in every social update we make, "Liking" it, "Retweeting" it, etc... Stop and ask yourself when was the last time you sought out a potential prospect or random follower in social media and commented on one of their social updates or replied to a tweet?

It takes (at least) 2 to tango, and no one wants to talk to someone that is so self centered that they have no interest in what anyone else is saying. Making social media work for you is just as much about reaching out as it is waiting for people to reach for you.

Businesses Should Use Social Media Like Networking, Not Publishing

Overall, there is a lot more to be gained by small businesses if they use social media platforms for what they were designed for - socializing. Posting a random thought, link, video, etc... doesn't spark socialization. Pretend your audience needs cue cards and start the conversation for them. This is a key component to any social media strategy.