Scheduling Tweets in Advance for Free With Buffer

One of the most-important aspects of succeeding with a social media strategy is to stick with it. Posting a tweet or two per week isn’t going to cut it. On the other hand, it’s also important to set time aside to devote to your social media accounts. The problem with that is you’ll generate a whole bunch of activity in a short amount of time, and if your followers aren’t paying attention during your scheduled time there’s a good chance they’ll miss your Twitter updates entirely. So, how can you keep your Twitter account active without spending your entire day posting tweets?

Scheduling tweets isn’t a new idea. Hootsuite has been doing it for quite some time. However, what caught my eye about Buffer is its simplicity. All you have to do is create an account which takes a second, link your Twitter account which will take up second #2, and then type in your tweets. That’s it. You don’t even have to worry about scheduling them, that’s all done by Buffer from the get-go, so they’ll figure out when to randomly post your tweets (though you can go back and modify their initial settings to your own preference). With Buffer you can finally set aside a time to plan out your Twitter updates for the day or even week, just by adding tweets to your Buffer. 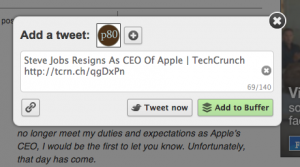 There are also some cool features with Buffer that makes tweeting a lot easier, including web browser plugins that can let you add a tweet from any web page you come across during the day. This happens to me all of the time - I’m at work researching things for a project and I come across something cool that I don’t have time to post to Twitter at that instance. I try to make a mental note to revisit the news story or article later, but 9 times out of 10 I forget. With a browser plugin like Buffer for Chrome you’re just a click away from adding a tweet to your Buffer with the current page’s web address packed into a neat short URL.

The folks behind Buffer have also created mobile applications for iOS and Android so you can build your buffer on the go, and even a badge you can place on your blog or website so visitors can quickly tweet your content by adding it to their own buffers. All of these features are designed well and simply, so unlike the Hootsuite dashboard which can be quite intimidating if you’re not sure what you’re doing, you’ll be finding your way around Buffer in no time.

There is one final feature that I really like that will make Twitter very easy to use if you’re just starting out, whether you’re posting to your personal Twitter account or the account you created for your small business, and it’s called Suggest A Tweet. When you’re just starting off with Twitter a lot of times folks aren’t really sure what to post, or maybe they don’t have any content to post or anything significant to say, but they don’t want their Twitter feed to be stagnant. If you ever run into that issue with Buffer, you can use their Suggest A Tweet feature that will automatically come up with a new tweet for you to post all on its own! You can of course modify the tweet before sending it to your buffer if you so choose, but it’s a perfect way to overcome Twitter writer’s block. Try out Buffer right now by heading over to bufferapp.com, and let me know what you think in the comments!