Tomorrow marks the end of voting for the 4th Annual Mashable Awards. If you haven't already voted, check out the nominees and get voting! My favorite category this year is the Most Creative Social Media campaign. All of the finalists in this category show that creativity is more important than budget. Yes, some of them are able to hire a room full of creative people to come up with the ideas and implement...but in the end it is the 1 initial idea that sets them apart from the rest. Let's take a look at the finalists for 2010.

Although the Old Spice Guy has retired, this marketing campaign was awesome. The 'guy' was Isaiah Mustafa, an actor and former NFL practice squad player. He was the original actor in the "Your Man Could Smell Like" commercials. The original marketing campaign was pretty good, but it really took off when they started creating YouTube video responses. The responses were mainly sent primarily to celebrities, including 4 to Alyssa Milano...followed by actual roses. Overall this idea could have been done using an inexpensive camera, microphone and celebrity, the IDEA to send individual responses through YouTube to people was priceless. Check out the latest video to everyone:

Stand Up For WWE

The WWE has gotten some bad publicity lately regarding the ignoring of possible steroid use in their sport. Their social campaign called, 'Stand Up for WWE' revolves around asking for the WWE fans to speak out and back up the WWE. People that 'stand up' for the organization should believe that the WWE is not turning their back on steriod use, although many are probably just fans that may or may not care about the actual situation. The image shows 10 ways of how the WWE is asking for fan support, more than half of them directly correlate with social media. This is not as much of a small business strategy, as they rely heavy on the current popularity of the sport. Overall it shows that they are aware of the power and popularity of social and are willing to use it as their main support channel.

Groupon is a social style 'couponing' service. They claim groupons are more fun when you share with friends! The idea behind their Live Off Groupon campaign was to try and get 1 individual to live off of nothing but groupons for an entire year. This individual would be the 'Groupawn'. Josh Stevens received this challenge from Groupon:

First, say goodbye to your routine, your apartment, and your signed photo of Elvis punching Nixon. You’ll end your lease and put your stuff in storage. You’ll close your bank account, cut up your credit cards, and put your money in escrow. You’ll have nothing but a stack of Groupons and a suit of clothes made from Groupons.

We’ll give you a camera, phone, GPS, and computer to document your experience. We’ll expect you to blog most days. We’ll also give you unlimited Groupons in any of our 60 cities, including Groupons for lodging and transportation and special Groupons for cities that don’t exist yet.

Who shouldn’t apply!? Probably everyone shouldn’t apply. We want to be honest from the beginning: this will be a catastrophic disruption to your life. But you will have zero expenses for a year. You’ll get to travel across the country trying all the cool stuff we feature on Groupon. And you might get $100,000…in money.

This is definitely more of a costly campaign for the marketer, but builds a very cool following around the 'Groupawn' through the social media environment. Definitely not a task that everyone could handle, but the idea of the campaign itself and promoting everything through social media was a very creative idea.

Although this is a worldwide cause, this is definitely much more of a grassroots campaign. Other than time, this style of social media marketing revolves around creativity, not budget. Jennifer is doing a great job with all of her social avenues as well as keeping up with her blog. Keep it up Jennifer! 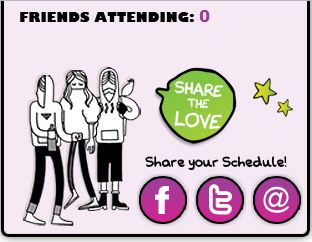 Bonnaroo, one of the biggest concerts of the year. 2011 has over 160 acts...definitely a scheduling nightmare. Zoltaroo, The Bonnaroo Mind Reader was created to help you choose who you are going to see as well as creating your own schedule for the event, social media was the basis for their campaign.You can log into the Zoltaroo network using your Facebook login...even cooler, it combs your interests and is able to suggest acts for you! This is definitely a development heavy social campaign that has a huge following around the event, nonetheless an extremely creative idea!

I am going to go with the Old Spice Guy. They were creative enough to take a small following around a TV commercial and make it HUGE through social media. The best part is they could have done this on a budget that was next to nothing.