Shorten Your Tweets With These Handy Tools

I'll admit it, I like words. A masterfully-composed written thought is something I can admire from time-to-time. Unfortunately for me, that makes getting my point across in one Twitter update incredibly inconvenient. More often than not I'm struggling to shrink a tweet by a handful of characters and have to sacrifice an entire word to make everything fit. In fact, the art of fitting a complete thought into a tweet has almost become a game to me. The good news is that there are other people in the world that either have the same struggles as I do or recognize that brevity isn't everyone's strong suit, and they have therefore made some awesome services that make shortening up your tweets much easier. 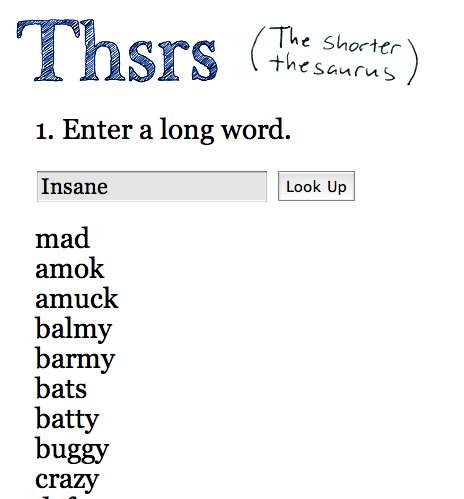 Thsrs is a really cool twist on an idea that's been around forever. Everyone's used a thesaurus at some point in their life, but Thsrs will only return words that are shorter than the original. Type in "inconsequential" and words like "unimportant" and "illogical" are returned. That's only one word and we've saved 3 to 4 percent of our total tweet quota! Thsrs is great for folks who don't really like to use the internet shorthand that has come into popularity, particularly on Twitter where it's almost a necessity at times.

140it is a bit easier to use than Thsrs, simply enter your tweet into a textbox and it'll automatically shorten it to 140 or fewer characters by shrinking links, replacing full words with their shorthand counterparts (anyone becomes any1 for example) and by shortening company names into their stock symbol.

One thing I really like about 140it is they have a browser plugin that you can use from Twitter.com without leaving the page. Just type a tweet, click the link for the plugin and the shortening happens automatically. It will also prioritize what to shorten instead of automatically shortening everything in the tweet. For example:

Has anyone tried out the new macbook air? I've been thinking about purchasing the eleven inch model http://www.apple.com/macbookair/features.html

Has anyone tried out the new macbook air? I've been thinking about purchasing the eleven inch model http://bit.ly/fn9vGw

Notice that because simply shortening the URL was sufficient, they didn't turn 'eleven' into '11' or 'anyone' into 'any1.' I'm not a big fan of using shorthand if can avoid it so that's a big plus for me.

The last service I'm going to recommend is Twinslator. If you ever need to reach out to an audience whose native language than your own, Twinsalor is the perfect tool to get it done. Aside from simply translating the content of your tweet (that's fairly simple, there are already plenty of online translation services), Twinslator will also post both the native language and foreign language tweets simultaneously for you.

Do you use a tool or service not mentioned here to help with tweet composition? Let us know about them in the comments!