You know that feeling when you've been working on important paperwork for hours and then Dumbass You knocks your coffee all over it?

That's how it feels when you dump bad SEO on your website. Days, months, maybe even years of work can vanish in an instant.

Bad SEO is a plague upon reputable optimizers everywhere. It's cheap, it's dirty, and it causes potential clients to think cheap & dirty tactics are the norm. In reality, shady tactics will bring Google's banhammer down so fast you won't even know what hit you.

But, tell that to the guy who doesn't give a shit, I'm not paying you $50* for this project when Shady SEO Incorporated will do it for $20* (*relative values).

To which we rip our hair out and scream, "There's a reason Shady SEO is so cheap! Have fun with your website ban and your bankruptcy!"

Getting banned and losing business is only the tip of the iceberg when it comes to these SEO horror stories. Take a look at some of our favorite examples of SEO gone wrong.

One day, Mark Munroe found himself trying to solve an SEO problem for his friend's company, iFly.

iFly's traffic dropped to almost nothing over the span of a few days. Here's the actual traffic graph shared by Search Engine Land: 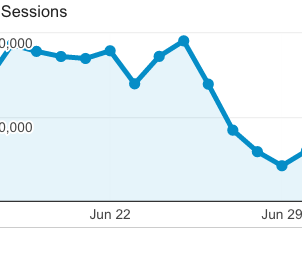 What was the problem? Someone let a bug slip through - one tiny line of code that had been placed on every single page of the site.

This small piece of code completely tanked their SEO progress. It told Google and Bing to completely ignore those pages; therefore, the pages were no longer being indexed by the engines and were not showing up in search at all.

Munroe was able to isolate the line of code and remove it, but he couldn't reverse the damage to his friend's SEO. It takes months to build up SEO, and mere hours to destroy it.

This is an SEO problem that came from a technical mistake. There are so many factors that effect SEO performance - it's not just the content on your website or the site design that can affect your rankings.

When you're facing a problem that's affecting your entire business, it's important to have an experienced SEO to pick out the source of the problem. Can you imagine what would have happened to this company without Munroe's help?

You have to stay on top of your rankings and analytics to catch these things right when they happen, and then you need to have a reliable expert on hand to sniff out and fix the problem.

A cheap SEO firm is more likely to peace out at the first sign of trouble. Like in our next story, where the firm's website went completely offline once shit hit the fan.

Moral of the story: There are hundreds of factors that impact SEO, and your website needs an expert who understands them all. Not everyone will have an SEO friend to bail them out when the ship starts sinking.

Aero Pets Ltd. is a pet transport company located in New Zealand. The owner, Monique Johnstone, was floating her business along quite happily until she was contacted out of the blue by an "SEO firm." (Two of them, actually.)

The first firm promised brand awareness and riches beyond her wildest dreams. In the spirit of "What could possibly go wrong?", Johnstone enlisted their services.

"What could possibly go wrong?"

This first firm didn't ruin her website, but she wasn't seeing any positive results either. So, she decided to move her business to another SEO firm that had also been calling (harassing) her.

This second firm had good ideas and horrible, horrible execution. Johnstone was told that she should:

Generally, great advice. In fact, these are two tactics that we employ here at p80. What we DON'T do directly afterward is:

Unfortunately, those are both things that Johnstone's SEO company did, and she paid a very hefty price. The firm had also been doing link building in the worst way possible, so when Google's Penguin algorithm hit, her site was struck down to the very bottom of the search results (and in some cases, removed completely).

Even once she enlisted the help of a reputable SEO and fixed her website, it took months to see positive results. However, once those results hit, her business grew far beyond where she had started.

Websites getting penalized for bad SEO tactics is unfortunately a common occurrance. Mostly, we see penalties from business owners trying to rig up their own SEO, or those who have placed their website in the wrong hands.

Moral of the story: DO YOUR RESEARCH and don't trust your website to the first SEO company who contacts you. Your business is too important to hand it over to just anybody.

Melissa Agnes recalls the tale of an entrepreneur's experience with a black hat SEO company. Black hats are known for their cheap & dirty services, and are especially dangerous to the general public who don't understand the difference between white and black hat.

In the simplest of terms, white hat SEO = good, great, everything you could ever want or need. Black hat SEO = tactics that Google discourages and will penalize you for. Black hat SEO is a great way to ruin a business with very little effort. However, people get suckered into it because of the extremely attractive prices.

Agnes' unnamed entrepreneur had been working with a shady SEO company for a while. They had contacted Entrepreneur out of the blue (see a theme here?) and he hired them to build up his online presence.

Fortunately for Entrepreneur, he was able to identify the black hat tactics this company was using. As soon as he did, he asked them to undo the all the bad. They refused, and he rightfully posted reviews warning other website owners about their shady tactics. Unfortunately for him, he picked a fight with the wrong guy. 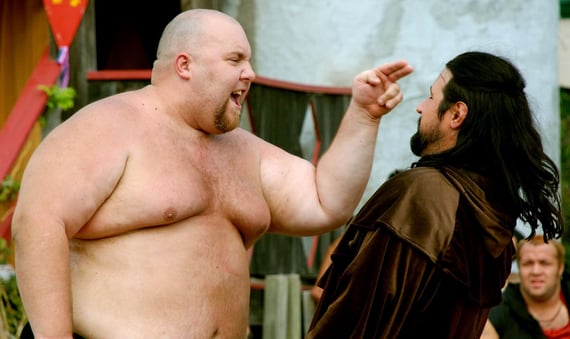 "This was a poor decision."

As soon as he revealed their unscrupulous actions, they threatened him and told him to remove the bad reviews. He refused, and they unleashed their wrath on his business.

They posted false negative reviews and generally defamed his brand online, apparently so much that "this poor guy is suffering from a negative and false online reputation that is handicapping his business and income."

Moral of the story: SEO companies who solicit you for business tend to be less trustworthy. It's better to avoid them in the first place than try to fight back in a bad situation.

Brad Gerlach is a well-meaning website developer who got into SEO by chance. He didn't have the budget for a real inbound marketing team (like so many people out there) and he decided to rig up his own SEO.

All Gerlach knew about SEO was that it could greatly increase his web traffic and brand awareness. He didn't understand white hat vs. black hat, or the consequences of bad SEO.

What was his biggest mistake?

He tried to do too much too quickly (did nobody learn anything from The Tortoise and the Hare?). White hat SEO - the pure white unicorn carrying success on its back - takes time. Months. Gerlach wanted results fast.

He delved deep into black hat SEO forums. He read blogs by black hatters who "had been doing this for years and never got penalized, bro!"

He learned how to build paid links and spin articles. The results were almost unbelievable - for a short time.

Once Google released its Penguin algorithm update, all sites that paid to build links were sunk. Gerlach's site fell completely out of the search results. He was invisible in Google. The techniques that had seemed so profitable just days before were suddenly his downfall.

The scariest part of Brad Gerlach's story is that is could happen to any amateur SEO. He only knew enough to get him in trouble - a great SEO provider will have years of training and experience to avoid this exact situation.

Reputable SEOs will also know the difference between white hat and black hat tactics. Experts will understand that Google is constantly changing its algorithms and cracking down on shady practices.

If he had invested more in a reputable inbound marketing company the first time around, he could have made his investment back and more.

Moral of the story: Don't cut corners; do it right the first time. The money you save taking shortcuts could be money invested in a real, long-term business growth opportunity.

Possibly our favorite dirty SEO story comes from Andrew Youderian, who is a successful eCommerce site builder. He had a successful run bootstrapping his own SEO for his first site in 2008, and decided to launch another site.

This time, however, he entrusted the SEO to an outside firm. He vowed to keep a close eye on them to make sure they were playing nice, but he slowly got distracted by the growing business and forgot about it.

Sounds pretty nice, right? The website was growing so fast he didn't even remember to check on his SEO team!

Not so much. Without Youderian's watchful eye keeping them in line, the SEO firm went a little nuts. They overoptimized - there was too much similar anchor text, links were bought and spammed, and the site was a mess. The release of Google's Penguin update was the final nail in the coffin.

He looks innocent, but he packs a punch.

Around the time of the Penguin update, Youderian was checking Google and found his ranking for "trolling motors" had fallen from #2 to #10. He was shocked, appalled, furious!

Years later, Youderian is still patching up the damage from that shady SEO firm. He uses his experience to warn fellow entrepreneurs about the dangers of outsourcing SEO. He had done so well the first time around. If you want something done right, maybe you have to do it yourself.

We have a different takeaway from this story. Not everyone will pick up SEO like Youderian did - doing it yourself can be just as bad as outsourcing to a shady provider.

If you have any doubts about your abilities to optimize your site (and to understand the difference between optimized and OVERoptimized), professional help will be much more beneficial in the long run.

Moral of the story: Always be aware of what other people are doing with your site. You should have a basic understanding of Google's algorithms, how updates can effect SEO, and how to tell if your SEO provider is doing it right.

For Youderian, it was simply a poor judgment call that tanked his website. For some of the others in this article, ignorance and greed were their downfall.

If you take nothing else from this article, remember these five lessons on choosing the right SEO:

We obviously can't guarantee SEO success, but these lessons will keep you from falling into the same traps as the people in these stories. It's much more painful to learn these things the hard way.