What if you could lose weight by eating more?

What if you could make more money by working less?

What if you could make more sales by increasing your prices rather than decreasing them?

You've probably heard of the popular card game Cards Against Humanity. It's offensive, vulgar, disgusting, and a truckload of unadulterated fun.

If you've ever played Apples to Apples, CAH follows the same basic premise. Choose a white card in your hand that you think matches well with the black card on the table. Except, with a whole lot more blasphemy and approximately zero political correctness.

And that's one of the tamer examples.

Indeed - this "party game for horrible people" increased sales by increasing the price of their product. Even more impressive, they do this every Black Friday - and it's a major hit with their customers.

How do they do it? Why in the world would anyone take them up on this offer?

Let's take a closer look at the situation.

Every Black Friday, Cards Against Humanity offers exclusive deals for their customers. Not surprising, right? Black Friday deals are everywhere - it's more unusual to find a company that doesn't offer discounts the day after Thanksgiving.

For consumers, Black Friday means major discounts, huge deals, and losing all semblance of dignity in the stampede to acquire said deals. It means buying that new game console for 60% off, or stealing a vegetable steamer from a baby.

Cards Against Humanity offers a different kind of deal.

2013 was the first of the CAH Black Friday deals. They were obviously testing the waters. Seeing what they could get away with. Gauging the response from their audience.

To start off the now-annual tradition, they promoted a one-day Black-Friday-ONLY deal: get the original Cards Against Humanity game for $5 more than usual.

Not only did their customers take them up on it, they went nuts over this marketing stunt. One customer left a Facebook comment that said, "Please release a promo code so I can get this deal all year round?"

Once CAH figured out its customers would put up with almost any kind of abuse in the name of entertainment, they launched an even more unbelievable marketing campaign.

You could pay $6 to receive your very own box of cow poop. That's right. Cow poop. Only on Black Friday. According to the team at CAH, this offer sold out within two hours.

So many people were scrambling to buy cow poop that it sold out. What a time to be alive.

The exclusive manure (100% made in America, by the way) was packaged in the usual Cards Against Humanity game box. Apparently, there were a few people who were actually shocked that they received exactly what they ordered.

CAH made $0.20 profit per box sold, which they donated to Heifer International (a charity that aims to eliminate poverty by providing livestock for developing communities).

Don't worry. It gets worse.

On Black Friday, the team at Cards Against Humanity took everything down from their website. They replaced it with a single form that looked like this: 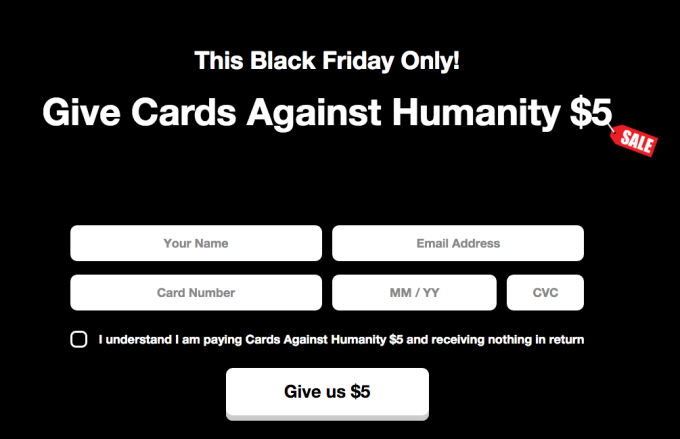 This is a marketing stunt that most businesses wouldn't even dream of, much less actually attempt and succeed. As you may expect, this idea received a mixed reception of disbelief and awe. Mostly that people were actually participating in the deal.

All in all, Cards Against Humanity raised over $71,000 in their buy-one-get-nothing sale. They also received the continued devotion of their current customers, and plenty of free advertising from incredulous news blogs.

At least until Black Friday 2016, you can check out what the staff spent $71k on. Here's one from Alex: 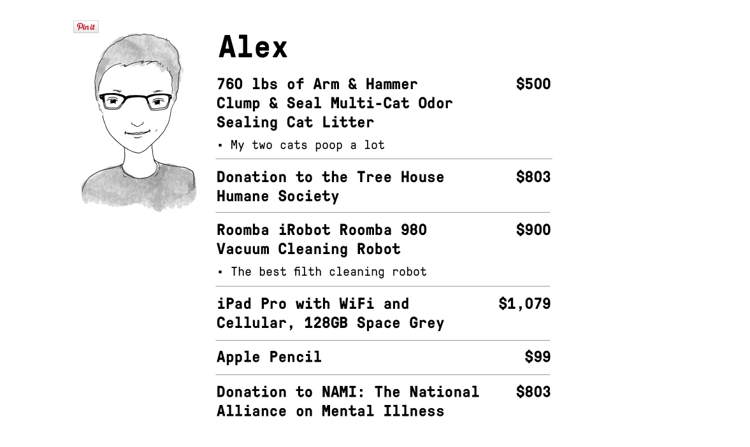 If nothing else, Cards Against Humanity certainly blazed an interesting trail through the marketing landscape. Maybe it would be more accurate to say they ran through it, screaming, lighting things on fire as they went.

But Why Does It Work?

1.  It Appeals to Their Buyer Persona

What do Cards Against Humanity buyers appreciate?

If you've already bought the game, you have no reason to buy it again. On Black Friday, you have the chance to support a company you love without buying the same game over and over again. You can spend your money on cow poop! Or, better yet, absolutely nothing!

You know your money is going to one of three places: a charity, game development, or keeping the creators alive and well. That's the benefit customers receive from these untraditional deals.

Cards Against Humanity is the poster child for off-color party games.

However, it's not the only raunchy party game ever made. People are coming up with new ways to combine card games and giving Grandma a heart attack every single day. However, it's difficult to name them off the top of your head. Why?

Because none have cultivated the spectacular branding of CAH.

It's kind of like that restaurant where people pay to be insulted at by the waitstaff.

Visual impact, emotion, being part of the group - that's the CAH brand. That's why customers are flocking to this company. Marketing best practices be damned.

They went from raising the price, to poop, to paying money for nothing. Only the Cards Against Humanity team knows what's coming next. They've worked hard to one-up themselves every Black Friday. This year had better be a showstopper, or they'll be facing a large number of disappointed fans.

Personally, we're intrigued to see what they'll come up with this year. It's like the world's worst Christmas present for marketers.

Key takeaways for you: 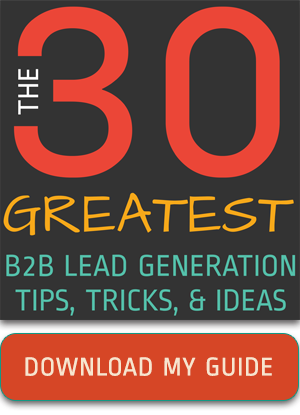 Disclaimer: No matter how good you are at the three points above, you're probably not going to be successful if you try to raise your pricing for no reason.

Do what makes sense for you. Do what fits your brand. Do what your customers will appreciate.

If you want to learn more about brand awareness, check out this related article: