Inbound 2017: Be a Friend (and Seal the Deal) with Inbound Sales 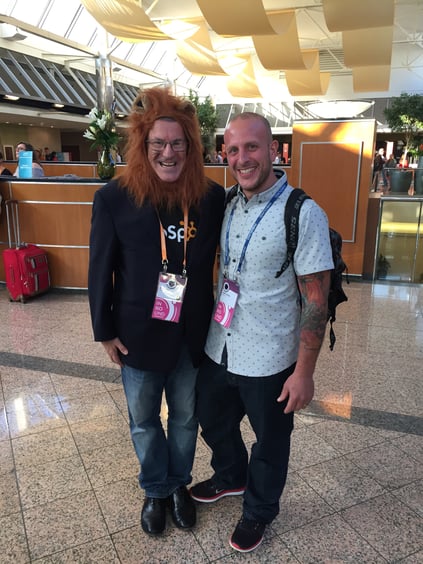 Like an old friend, Josh Curcio reached out to say “hey” to a lead. Josh knew 2 things: that the prospect, a sales director at a company he last spoke to 7 years prior, enjoys mountain biking and that the company was recently was in the news because of a video about the company that appeared on Facebook.

It was a sales call. But it didn’t sound like a sales call. After some initial hesitation on the other end (that’s to be expected), Josh steered the conversation to focus on happily sharing interests.

“Well, listen,” Josh says,“I’ve had a look at your website,” and he calmly rattled off a series of potential changes, including:

Josh had him there. Josh was being a "sales lion," a stealthy hunter with all the tools to seal the deal. His suggestions ultimately pointed to that company’s lead gen -- something the call recipient needs desperately and that Josh’s inbound marketing agency can provide. Suddenly, and very subtly, the call turns from “I’m happy to chat about your interests” to “Trust me to ease your pain.”

The Truth: It was a Roleplay Call During an Inbound 2017 Panel Discussion

The #1BigThing that Supercharged My Agency’s Sales

Josh was role-playing with 3 other “sales lions” and HubSpot sales gurus David Weinhaus and Dan Tyre (who was, indeed, wearing a lion costume) during an Inbound 2017 breakout session. They demonstrated the back-and-forth commonly encountered on inbound agency sales calls.

In this faux scenario, he got the lead to agree to an in-person meeting with 3 important decision makers from that company -- the CEO, VP of sales, and marketing strategist. He also got him to agree to watching a video on inbound marketing as homework beforehand.

The 3 other “sales lions” did so in their own special ways, too. Here were their choices for #1BigThing:

In her roleplay call, Barbro found “the gap” with a line of questioning meant to make the customer personally assess weak points on the spot. She says, “You want the customer to say, ‘Oh, shit, we’re not going to reach our goals if we don’t take action here.”

Christine helped the customer and avoided the hokey sales pitch people smell a mile away. She asked if he’d be attending an upcoming event she’d be speaking at and if she could borrow 20 minutes for an in-person discussion on how her agency can assist.

Omi sold value by subtly offering specialized content that company’s website lacked and what that could mean in ROI terms. “I felt like that cost me some deals early on,” she says, “because I wasn’t able to articulate why they should spend money on this, and not only that, but spend money with us.”

No, I didn’t forget. What was Josh Curcio’s #1BigThing? “Pick up the phone,” he says. Sounds simple enough, right? Well, if you’re picking up the phone to call a friend, it kinda should be.